Introduction to the 3d printing process

Most people buy a 3d printer, typically a FFF (fused filament fabrication type), after seeing something printed out professionally and after printing something themselves wonder what went wrong.

This is where the 3d printer anatomy series will help in understanding what the limitations are.

Their prints are stepped, often fail, have a lot of stringy bits and droopy bits.

Do they keep going?– only the inquisitive, the rest are up for sale on Craigslist,Gumtree or E-bay or in the attic along with the breadmaker, sandwich toaster and scalectrix.

So those who are left – what are they to do?

Well this tutorial series will show you the whole process of 3d printing, starting from looking at a model and judging whether it will print correctly or rotating it so it will, through to how the 3d printer does its stuff, the different parts of the system. To the filaments, what can be used for what. To looking at the printed part, to make adjustments to reprint it without errors.

I hope you will join me in this voyage of discovery into what is under the lids of the 3d printer ( or in the case of a prusa i3, why is it not printing now!!). And how to setup the files for the best chance of getting a perfect print.

This series will be based on working with my Prusa I3 clone. What I have learnt, how it does what it does. So I hope you will be able to translate what is shown onto you own printer – if not shout out and take a few pictures, give all of the information you used to produce the problem and we will see what we can do to help. 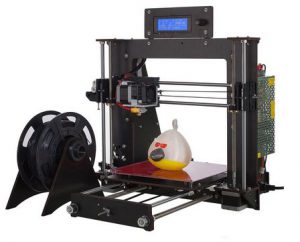 To a lot of people, 3d printing should be about taking a couple of pictures, converting this into a file then printing it.

The industry is not at that stage yet, but it will either go one way or the other. If it becomes highly commercialised then there will be leaps and bounds in new software packages along with new hardware.

A lot of people – myself included- want to be able to print in full colour without having hundreds of reels of filament feeding into the machine.

It would be nice to get rid of the need for a filament reel and use a cartridge system. But I am getting ahead of myself.

At the end of this series I want to sum up where I would like the industry to go.

I don’t know, I don’t have that much influence on the industry and we all don’t know, until they are released the new machinery which is coming out. The one I like at the moment is the Zmorph colour mixing head.

So as I say will you join me in the next post of the 3d printer anatomy series starting at the model conversion process into the file for the printer.