A while ago I wrote a post about replacing your bearings. SB1 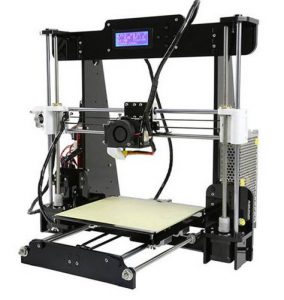 In that post I had bought a set of bearings from China, they turned out to be very poor quality.

Even just running them up and down the rod I could feel that they would make the prints even worse than what was already on there. They were lumpy and grinding, I cleaned and oiled them to no avail.

So what to do.

Chinese bearings no good – now what

At the end of the article I had talked about the polymer Igus bearings, but had not used them.

Looking on Thingiverse I found a printable bearing, this I did.

Some of them were ok and others were tight, this was only found when they were inserted into the pillow blocks.

Reassembling the printer i could hardly move the X axis by hand.

Using the stepper it would move. I felt it had a lot of friction on it so never used them to print anything.

) I found a supplier of the Igus bearings at a price I liked and ordered some – as the supplier was in the uk they arrived in a couple of days. Definitely not used to that anymore!
Removal of the printed bearings has been covered in SB1.

Fitting the Igus bearings was easy, they just slide in.

Before doing that, as I had read they needed ‘bedding in’ – removal of the surface to expose a certain amount of the embedded lubrication, I ran them up and down the rods a few times to try to ‘bed them in’.

They felt good and tight on the rods with little or no slack but smooth running.

I was looking forward to seeing the printer operating with these.

Fitting the bearings into the pillow blocks, again was no problem, they just slid in.

Putting the printer back together i thought, brilliant – will promote 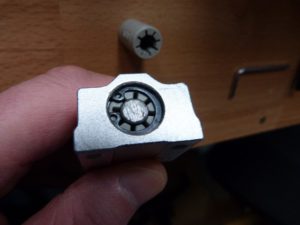 these as a very good solution.

Too much movement – and what to do about it

So undoing one of the pillow blocks and moving it so I could see it I tried to rotate it, and found I could, a little bit.

Squinting and looking closer – while rotating the block I could see the block moving but not the bearing- so what was it.

I removed the pillow block and bearing and tried moving the bearing- it was a little loose in the housing.

This is what was causing the ‘slop’ in the printhead.

So – out with the snap ring again.

What can i use to take up the ‘slop’

The solution to Igus bearings ‘slop’ in pillow blocks

Looking around i came across a reel of PTFE plumbing tape.

I wrapped a single turn around the bearing in the middle and then pushed it back into the block – definitely no movement there now!

Screwing that block on and doing the same with the other blocks there is  now no movement in the printhead.

Have I used it in anger yet – no. But i am sure that when I do i know that there is very little ‘slop’ in the printhead.

Have you come across a problem with the Igus bearings? if so what was it and how did you deal with it?

I hope this has helped if you have the same problem as I had and do not blame the Igus bearings like I was just about to!

3d printing ideas for students
3d printing ideas for students...
Anet A8 and TPU : First Steps in Getting More Flexible
Think it is difficult printing...
3d printer problems: hardware error: build platform heating up when printer first switched on
A little while ago a friend ha...
Anet A8 problems - Are They Real?
Anet A8 3d printer – A fire ...
Renren3d LE test print
[video width=\"320\" height=\"240...
Robo 3d C2 printer review – a stylish printer for your home
[caption id=\"attachment_439\" a...
designing for 3d printing
\r\nWhen designing for 3d printi...
How to smooth PLA prints
Smooth PLA prints - how to ach...
Anet A8 bearing replacement- SB1
Service Bulletin 1 (SB1)\r\n\r\nTh...
Anet A8 fan- do you want to hear the silence?
One of the most frequently ask...
What is a 3d Printer and How Does it Work?
\r\nWhen you see these objects p...
Where to place your 3d printer for the best results
\r\nSo you have bought yourself ...
3d Printer Project Ideas: Apple Mac Power Supply Stand
Another post in the 3d printer...
3d print journal 28-11-17 : Anet A8 problems
More Anet A8 problems\r\nPrintin...
What is the Zmorph 3d printer? More than just a printer!
[caption id=\"attachment_520\" a...
File Formats for 3D Printers
There are four main file forma...
BL Touch sensor: An end to your manual bed levelling?
BL Touch sensor review\r\nFed up...
Why you need a multimeter if you have a 3d printer!
What a digital multimeter can ...
Monoprice select mini 3d printer review – a printer for everyone?
What can a major retailer be d...
Ramps 1.4 connections : making them safe for the Anet A8
Make your Ramps 1 4 connection...
Solution for Blown Anet A8 Bed Mosfet on Main Board
My Anet A8 bed mosfet has blow...
Ups for a 3d Printer: Do you need one?
Why would you need a UPS for a...
Cooling nozzles for 3d Printers - What do you need?
Testing the cooling nozzles on...
Build Your Own 3d Printer Kit: Renren3d LE (A Delta Printer) Part 1
What\'s included in this build ...
Things to Make with a 3d Printer
What are things to make with a...
Anet A8 Power Supply – Adding a Mains Socket.
Adding a mains socket to the a...
3d Printer Project Ideas: Salt Grinder Part 2
This is the Second installment...
3D print Nozzle secrets
All about a 3d print nozzle\r\n\r...
3d Printer Belt Tension : Is it Important?
What does 3d printer belt tens...
Best 3d printer review: 3ds CubePro 3D Printer
The Cubepro Trio 3d Printer Re...
3d print journal 01-12-17 : bed screws binding
3d print journal 01-12-17 : be...
Build Your Own 3d Printer Kit: Renren3d LE (A Delta Printer) Part 3
This is part 3 of build your o...
Build Your Own 3d Printer Kit: Renren3d LE (A Delta Printer) Part 4
Build your own 3d printer kit ...
How Much does 3d Printing Cost?
A lot of people when I tell th...
Winbo super helper 3d printer range : A cheap introduction to 3d printing?
About Winbo\r\nWinbo Smart Tech ...
What Does a 3d Printer Use to Print
[docxpresso file=\"https://best...
Delta printer calibration guide : Z axis
Ok so you have built your prin...
3d print problems : Become an investigative detective
Are you a destroyer or a det...
Anet A8 hotend problems : leaking filament
\r\nThis article is how to find ...
Anet A8 Bed Leveling : How do You do Yours?
Having had my anet a8 for over...
3d printer project ideas: salt grinder repair
While looking around for 3d pr...
Anet A8 mods : Adding an auxilliary socket to the Anet A8
Anet A8 mods are an ongoing pr...
What is 3d printing technology?
What is 3d printing technology...
How to Clean Your 3d Printer Heated Bed
Note: This how to clean your 3...
5 Mods for the Anet A8 3d Printer
The Anet A8 is a cost effectiv...
Best 3d Printer review : UP Plus 2 Review
\r\nThis TierTime UP Plus ...
Anet A8 Mods - How to Make Your Own Heat Block Cover
How to make your own heat bloc...
Replacing the Bowden tube on a 3d printer
What is the Bowden tube on a 3...
3d print journal : Polymer Igus bearings
Update to SB1 : replacing your...
Build Your Own 3d Printer Kit: Renren3d LE (A Delta Printer) Part 2
This is the second in the buil...
How to Clean 3d Printer Nozzle
I have not had my 3d printer f...
My 3d Printer\'s not Reading My SD Card: HELP
my 3d printer\'s not reading my...
3d Printing Modeling Software : What are your choices for free?
Which Free 3d Printing Modelin...
Ultimaker 3 Review: A Dual Head Printer Worth the Money?
Ultimaker 3 review\r\nThis Ultim...
3d Printing : what questions should you ask?
3d home printers have come a l...
3d print Journal 10-01-18 : Slicer Vase Mode
Happy new year to you all.\r\nPr...
Anet a8 upgrades : Adding Led Light to See Your Prints
What Anet A8 upgrades have you...
3d printer project ideas : How My 3d Printer Fixed A Car
Another post in the 3d printer...
3d Print Failure : A Lesson to be Learned From
You know when you have one of ...
Qidi Tech 3d Printer: The best starter printer?
The Qidi Tech 3d printer is pr...
3d Printer Anatomy : Introduction
Introduction to the 3d printin...
Best Way to Calibrate a 3d Printer: Z Axis
This is one the  \'Best Way to...
Learn how to start 3d printing lithophanes
Lithophanes: what are they?\r\nP...
3d printer problems : error messages : MAXTEMP error
You switch on your printer and...
Anet A8 3d printer review – Should you buy this DIY 3d printer?
This Anet A8 3d printer review...
What\'s the Difference Between the Various Adhesion Promoters for Build Platforms
You know the trouble you have ...
Anet A8 upgrades : External Mosfet for the Bed
A lot of people are interested...