There are four main file formats for 3d printers 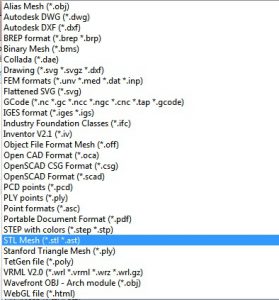 This is still the most popular, but I can see this fading away into the distance with new printers coming onto the market. The limitations of the .stl (stereolithography) format will not allow the addition of colour – so two colour printer will struggle to use the file format without major modifications. The colour mixing of the Zmorph printer already uses their own software rather than the usual slicer.

As time goes on and 3d printers become more complex the need for a new standard was identified. The American Society for Testing and Materials (ASTM) released an open format .AMF file type.

It is XML based and is designed to be simple, scalable, forwards and backwards compatible.

This file type can be opened with :

Based on the COLLADA ( COLLAborative Design Activity) xml schema, now owned and developed by Autodesk.

The COLLADA format is now supported jointly by sony and the Kronos group.

The .obj format is widely considered to be the universal format for 3d image editing applications.

The file contains 3d co-ordinates, texture maps polygonal faces along with other information.

It can be opened by the widest range of programs

xml is a widely used format, which in itself does not do anything. It is only when a program is written to take the information and display it in a form the user understands that it becomes useful.

The xml author must define both the tags and the document structure.

The tags – like in html <H1>, <table> are specific to each application.

The file format has been designed to be forwards and backwards compatible. 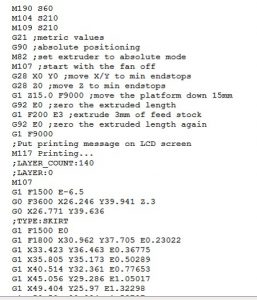 This file format is also known as RS-274. It has been used for donkey’s years in the electronics industry and later in the CNC mechanical machines.

It tells the computer aided machines how to do something.

The CNC gcode tells the machine to move a tool to a certain position and start cutting.

The same concept has been adopted by non-cutting machines such as photoplotters and 3d printers.

Different codes are used for different functions, the file is in text so can be looked at with notepad.

The slicer program you use takes care of the translation between the output of your cad and the gcode necessary to drive the printer.

So every time the printer moves to a new location or feeds more filament this is a line of code. 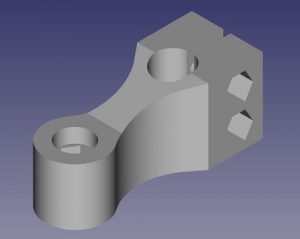 At some time a consortium of manufacturers will group together and sit down and talk through the problems.

They will take a few years to agree, but in the end will come up with a workable idea for a new specification to take the industry forward.

This is all assuming there is the take up form the consumers. If the

demand isn’t there then it will stay as it is and not grow. This would be a shame as there is a lot of potential in the industry for good. Bringing back designing to the common people, allowing freedom of expression again. Similar to the punk era of the 80’s.

Leave a comment in the box below with what you think would be a good move for the manufacturers to make with regards the file format for 3d printers?